I am Kickstarting a new cafe. I need your help. I need this cafe to be scattered far and wide. I want as many people as possible to know about it. This is my shot, and I'm damn proud of it.

You can go directly to the Kickstarter page here.

Posted by Aaron Martin-Colby at 6:55 PM No comments:

Email ThisBlogThis!Share to TwitterShare to FacebookShare to Pinterest
Labels: stuff

I was just watching a commercial for a credit card that offers 30,000 "Thank You" points to new card holders... whatever the hell those are. I've been thinking a lot about the nature of consumerism in our country, and one of the things that hit me is the one-two combo that most credit cards use to ride on the coattails of the "good life" concept that has goaded Americans into buying lots of crap that they dont need.

Travel and dining. Think about it. Frequent flier miles, companion tickets, benefits, free VIP lounges, so much of credit cards are based on this illusion of people being upwardly mobile, jetsetting superhumans. That's absurd! People in America would have to fly back and forth from New York to LA ten times a year to make all of these credit cards make sense.

Credit cards are not the root of these issues. Credit card companies are part of the problem, but they are also very much a part of a broader social narrative of the good life. Think about the past twenty years. The sheer amount of money being spent on eating out has increased ten fold. Conversely, as is equally American, we are spending less than ever before on this food.

I see this in credit cards. They all offer dining rewards. It is one of the the original credit card benefits. Hell, the first credit card was called Diner's Club! It's a sham. It's selling a hollow dream to people who rack up redit card debt that bogs them down.

I don't know how I feel about this. I love restaurants. I love Food Network. But this "good life" marketing message that we have been fed by both companies and the government since the end of World War I is an infuriating lie. It is doing ever-increasing amounts of harm to us and the planet.

I don't think that I can have it both ways, though. Where I live, Providence, has an amazingly diverse culinary market. Dozens and dozens of restaurants serving up everything from tapas to T-bones. One of the biggest reasons for this being true is likely because of this lie, and because credit card companies push dining out so hard as something to spend your credit on. If not for this lie, my culinary world would undoubtedly be more boring.

I would like to say that without the lie, people would still want their adventurous foods, they would just be forced to make them at home. Food Network (the parts of Food Network that don't show some God awful reality show or something competitive) would be on in every home and we would all be experimenting with creating our own yeast starters in the fridge. But how can I possibly demand that?

So much of this good life narrative is classist. Households spend less, but only wealthy households. This revolution of food has left the poor behind entirely. They have neither the time nor the money to be adventurous. They do not have the ability to fuel progress in a local food industry.

Similarly, how can I hope of even the wealthy households that they may one day turn into chefs when so many of those households are only wealthy because both partners work 10-hour days? One of the great deaths, in the multitude of deaths, in the erosion of the American Dream is the single-income household.

They even coined a term back in the 80's: DINK. It means Dual Income No Kids. It's also apparently a derogatory term for someone from Vietnam. Racist people, man. I just don't know. Moving on, back when they created this term, it was to describe materialistic people who wanted to afford super-nice things. Nowadays, they have the dual incomes not because they want the BMW; they have dual incomes because they just want to be able to afford a car, any car, that isn't used! These people are eating out, and they are the reason that places like Chipotle, Panera Bread, local food trucks, and the seemingly endless array of cupcake shops are able to survive. Their ultimately fruitless drive for the good life gives me more options.

Worse, times are getting worse. The money being earned is being ever-more divided between the haves and the have-nots. We have reached a point in our economic development where those that would at one time been seen as having "made it," — those earning over $150,000 per year — are seeing their income stagnate. They are getting no raises. Their benefits are disappearing. And their job mobility is extremely limited. Are we heading toward a time where our culinary landscape will have large hunks of it collapse as those who were previously supporting them are forced to restrict their spending? Will local cafes close en masse? Will food trucks die off?  Will the quest for the good life finally push everyone to the brink as it so nearly did in 2008? To me, it seems inevitable.

I have no solutions. Really, this has been nothing more than a public musing. But it is interesting how so much of "The Good Life" focuses on eating. And it is sad how much of a lie it all is.
Posted by Aaron Martin-Colby at 11:08 PM No comments: 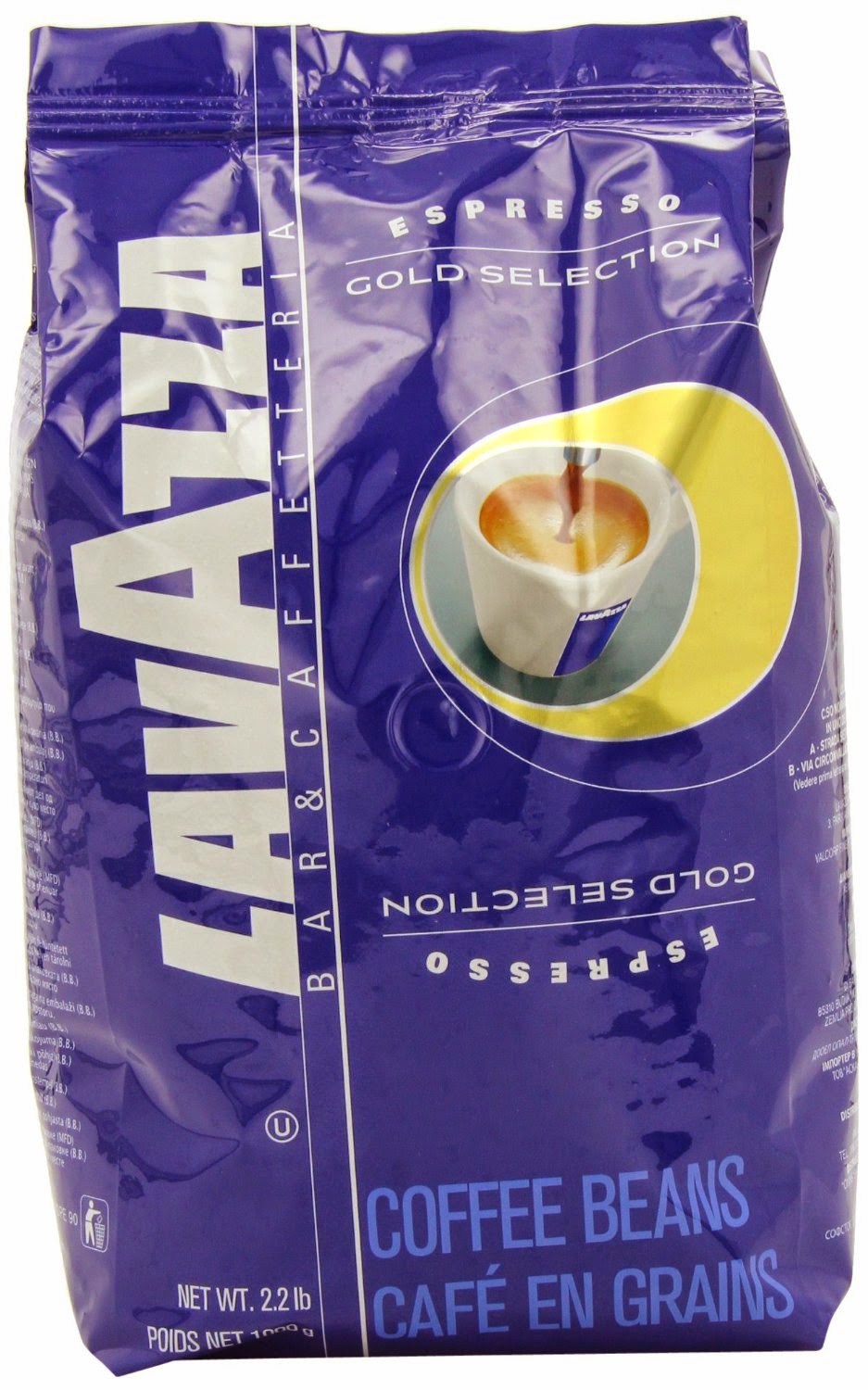 I recently reviewed Lavazza's SUper Crema coffee and found it to be very good. It is an excellent and affordable "every day" espresso blend. Lavazza also sells their Gold Selection as espresso-ready coffee, and since it is a bit more expensive than the Super Crema, I have high hopes.

As with everything Lavazza, the beans are in good shape and well-roasted. I like Italian coffees because they aren't as blasted as North American companies' beans as they chase Starbucks. The aroma from the beans isn't terribly impressive, but it is inoffensive.

Getting right to the espresso, there is a similar amount of crema from the Gold Selection as with the Super Crema, which means that they are either the same coffee or Lavazza was totally lying about their Super Crema blend being super... crema... yeah.

The crema is pale and good, with good oily stability. There is more sourness to the aroma than the Super Crema, but I didn't find that this translated to the tongue all that much.

Is it worth the extra cash? Not for me. I like the Super Crema and since I'm looking for an every day coffee that I can serve in large amounts to friends without breaking the bank, value enters my equation in a big way. Gold Selection is about 25% more, and if I was willing to spend that, I would buy specialty roasts from North American roasters for a bit more money.

That said, this is a very good coffee. It's a massive upgrade if you are buying grocery store coffee and even most Starbucks beans. Moreover, Gold is different enough from the cheaper Super Crema that you may find yourself definitely preferring the Gold Selection in a taste test. You can only easily buy these coffees in 1kg bags, so I would recommend buying one of each, comparing, and then giving the other beans to someone else.

Otherwise, if you want to take my word for it, buy the Super Crema. It's great.

P.S.
Make sure to buy an Airscape to store your beans. They will last for weeks and weeks.
Posted by Aaron Martin-Colby at 2:58 PM No comments: 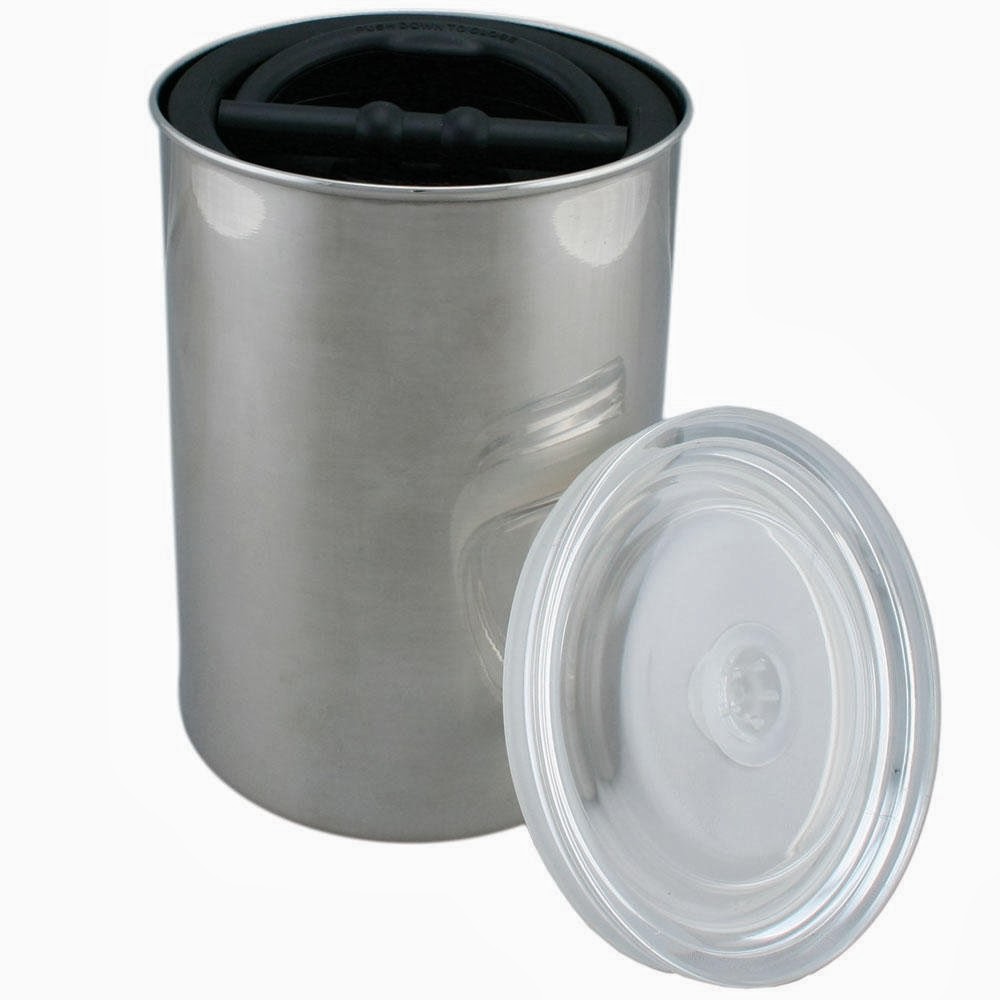 Don't bother reading to the end of the review. Go out and buy one immediately.

Still reading? I'll assume that you've already placed your order and are now reading to find out how awesome your canister is going to be when it arrives, because it is going to be awesome.

There are very few products out there that I would call a necessity for the average tea or coffee lover. The Airscape is a necessity. It will keep your tea and coffee fresh for as long as you need it to be fresh.

One of the biggest problems with both tea and coffee is getting it. You have to open the canister to retrieve the leaves or beans. Even if you use an air-tight canister, every time you open it, you are letting in new air. That air will, time after time, degrade your tea and coffee.

For most of us, this degradation is only apparent when we go from the last of the old stuff to a new package. The differences are so stark as to be detectable by even the most uncaring.

For me, the Airscape is a godsend because espresso amplifies the effects of aging beans. I am aware of it from day to day, even hour to hour.

In my old canister, my first couple of days of espresso shots were smooth, accurate, crema-filled cups of pure heaven. But after that, the shots failed increasingly frequently, the crema disappeared, and the rich chocolates and caramels went bye-bye. To compensate for this, I bought coffee in very small amounts — sometimes as little as an eighth of a pound.

The Airscape eliminates the need to do this. I can buy coffee in bulk, store the majority of it in another sealed container and keep my Airscape filled. The act of pressing the air out every time prevents the coffee beans from ever being exposed to new air for a long period of time.

The effects of this are so significant that I barely if at all have to alter my grind settings on my grinder as time passes. The ambient temperature and humidity levels become far more important for determining grind than the age of the beans. That is a revelation.

Tea is more sensitive to aging than coffee. My wife, a tea aficionado of the highest order, can taste the degradation of loose-leaf tea as time goes by. This canister eliminates that entirely. Your tea will always be fresh, punchy, and delicious. Once you determine your ideal steep temperature and time, you will never have to adjust that as the leaves age. You need this.

There are a number of other vacuum canisters out there, but none of them are as good as the Airscape's simple design. The Beanvac is impressive as it automatically sucks out all of the air surrounding the beans. The bad part is that it is battery-powered, thus requiring replacements, costs more, and doesn't do any better a job. There are also a number of other canisters that require you to manually pump the air out. None of these achieve the easy simplicity of merely pressing the cap down until it reaches the beans. It is not a pure vacuum, but it comes so close as to make no difference.

Buy the Airscape. You will not regret it.

Do you eat organic foods?

About The Watery Gourmet

I started the Watery Gourmet as a self-styled culinary expert. I don't know much aside from that I love food and I know how to cook. The blog concentrates on the Ocean State, but I will post about wherever I find myself. I will review restaurants and other places and will have general discussion of food in the southern New England area.

Quickview Rating
+ - Would not return
++ - Would possibly return
+++ - Would definitely return

I do all of my voice recording with services and hardware provided by Hippo Studios.